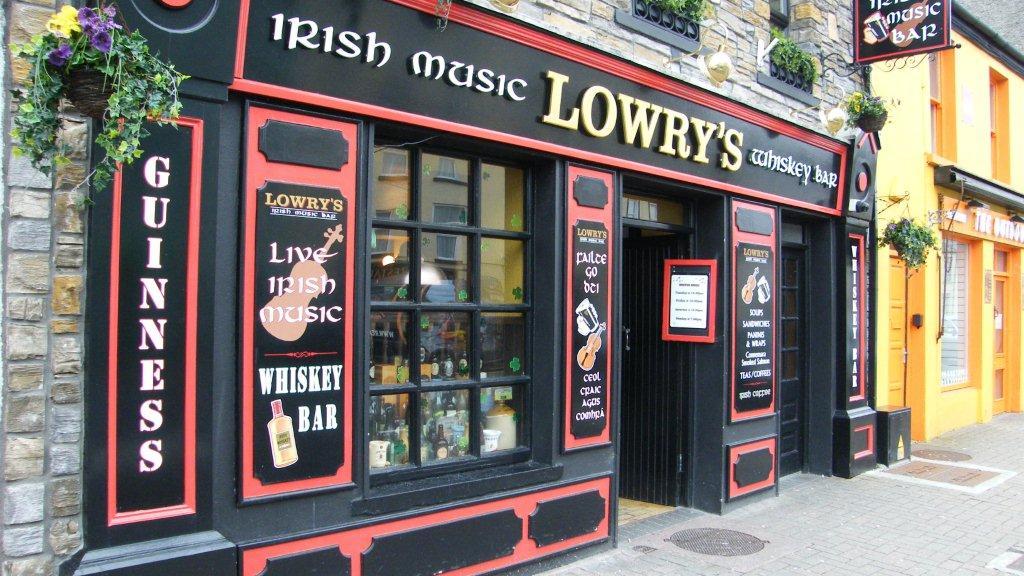 Lowry’s bar is an attractively fronted warm and friendly pub situated in the heart of the equally attractive town of Clifden in the West of Ireland.

Clifden itself is picturesquely situated at the foot of The Twelve Bens of Connemara on one side – with the wide Atlantic Ocean on the other.

About 100 years ago Clifden was at he cutting edge of technology as Marconi had the first commercial wireless station sending transmissions to America close to the town as well as Alcock & Brown touching down in a nearby bog after completing the first transatlantic flight. The internet and jumbo jets have both grown from these feats – or rather the Connemara bog nearby!

Smack bang in the middle of the Wild Atlantic Way which stretches from Cork down South to Donegal up North – what better place to take some time out and enjoy the uisce beatha.

That’s exactly what I did after indulging in one of my other passions – hill walking.

With over 100 expressions on offer it’s sometimes difficult to pick one out I haven’t tried before – but my eyes soon settled on a bottle of Dingle Gold from the recently established Dingle Distillery in Kerry – also on the Wild Atlantic Way.

A tuna melt toastie from the bar menu accompanied the whiskey as I settled my weary legs for a little pick-me-up.

Now Dingle Gold wasn’t actually made in Dingle. The distillery is too new to have matured it’s own stock yet. It’s a 3rd party offering whilst Dingle Distillery’s hotly anticipated and selling out fast exclusive first barrel release is just coming to market.

Dingle Gold is a blend of malt and grain spirits bottled at 46%.

There wasn’t much going on in the nose for me – but after a day being blasted by the wind and heather on the Connemara hills perhaps my senses had been dulled.

The taste was sweet and smooth with a slight bite that belied it’s 46% strength which followed through to a satisfyingly long finish.

A decent dram from the West – which leads me to my musical interlude of ‘Do You Believe In The Westworld’ by Theatre Of Hate.

I certainly do based on the delights of Lowry’s Bar.

In amongst the large array of Irish Whiskeys a trio of Connemara peated releases were prominently displayed which is only appropriate given the location. A good selection of Scotch and Bourbon was also available along with some tasty Swedish Mackmyra‘s and Japanese offerings too.

Damien – the helpful bartender informed me that whiskey tasting evenings were being arranged – so follow Lowry’s Bar social media for further information. They promise to be good nights!

In addition to the whiskey – there was also a selection of Irish Craft Beers too – a pleasant bonus not always found in a whiskey bar.

The cosy lounge area walls were festooned with whiskey mirrors – memorabilia and bottles arranged on shelves.

Lowry’s Bar would certainly be a wonderful place to spend the evening tasting some of the many whiskeys on offer.

Sadly my time was limited.

I bid my farewells and headed on.