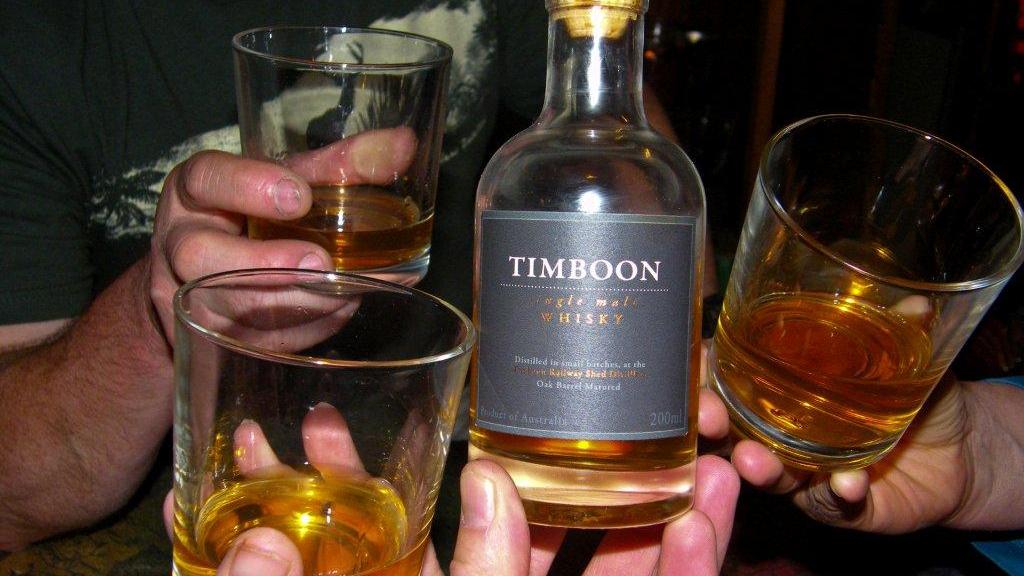 About a year ago it wasn’t the Wild Atlantic Way I drove around in search of whiskey distilleries – but the Great Ocean Road in Victoria, Australia.

We’d picked up the Wicked Camper late in the afternoon & left the Melbourne cityscape heading West. Our first stop was the industrial town of Geelong – which happened to have a whisky distillery in the 1960’s producing spirit of dubious quality – to stock up on provisions.

Being wintertime in Oz, it got dark around 5pm. We just managed to catch the sunset over Port Philip Bay from the campsite in Portarlington – well, so near so far as the saying goes. The original Portarlington is only a half hour from our home in Ireland but lacked the sandy beach & pier of it’s Aussie sister.

The next day say us join the Great Ocean Road proper at Torquay – and only then did the stupendous views of heavily wooded steep hills cascading down into the wide blue ocean below enthrall us with it’s rugged beauty with every twist & turn of the road.

An overnight stay at Cape Otway found us shivering during the night  – we had underestimated the cold of an Australian winter – so a cabin was booked in Port Campbell the next evening to warm ourselves up!

This marked the end of the Great Ocean Road for us as we intended to double back & head out to the East of Melbourne for the remainder of the trip – but there was one destination I didn’t want to miss – Timboon Distillery.

Nestled as it is in the pleasant valley town of Timboon at the end of an old disused railway line – Timboon Distillery is part of the 12 Apostles Gourmet Trail. We both sat down for a tasty mid-morning snack of locally produced artisanal foods. I also got chatting to Josh – the master distiller & owner of the distillery and friendly eatery.

The still was rather small compared to Irish & Scottish standards – but it was attractively situated in the corner of the restaurant along with some quarter casks aging the spirit. The mash for the distillate was provided by a local craft brewery Forrest Brewing. I sampled Timboon’s Port Cask offering at 41% & found it a lovely rich, dark & slightly heavy single malt – well I am always partial to a port cask finish. So much so I bought one of their 200ml bottles to take home with me.

There happened to be a booklet which caught my eye as well.

The Whiskey Trail. Illicit Whiskey Distillers in South West Victoria. I had to have it.

Inside are the stories of hardy frontier men & women who had fled poverty & starvation in their home countries of Britain & Ireland of the 1850’s to carve out a new life in Australia. They often faced hardship in that venture & many turned to illicit distilling to keep themselves afloat. Descendants of these settlers have produced this highly informative booklet & placed plaques at historical sites to make up a whiskey trail.

It just so happened our intended route took in a few!

Obviously Timboon Distillery is part of the trail – with a display on the wall showing the history.

Next stop was the former Cobden Police Station where many of the raids started from. It now happens to be an ‘op shop’ – or charity shop – where we handily picked up a duvet & pillows to make our nights in the Wicked camper more comfortable!

Lunch stop was in the agricultural town of Camperdown with it’s fine wide avenue. The old Courthouse happens to have a whiskey plaque on it – but the very helpful tourist information officer inside was unaware of it’s existence!

We took her outside to show her when I eventually found it – and in return she informed us of the lifesize sculpture of Rabbie Burns!

And a lovely spot to eat at the Snout In The Trough food, wine & beer emporium!  Marvelous. Like Natalie Imbruglia sings – I’m ‘Wishing I Was There’ again.

The randomness of finding a whiskey trail founded on illicit distillers – some of whom were from Ireland – followed by a Scottish icon who enjoyed a drop or two but was actually employed as a tax inspector himself – all washed down by some gorgeous Aussie whisky – now I wasn’t expecting that at the end of The Great Ocean Road!