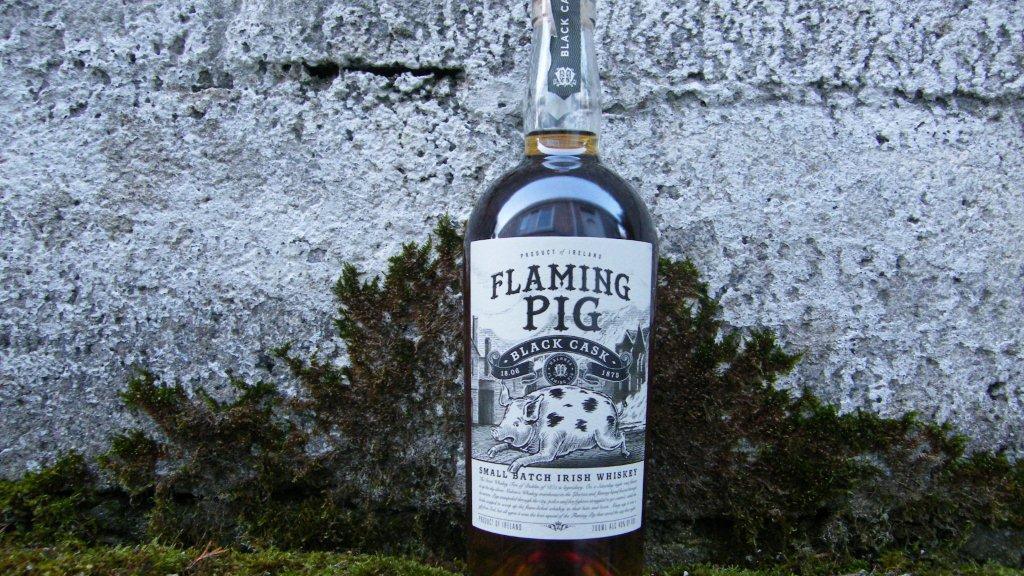 Every now and then the attractiveness of a whiskey bottle – the wittiness of it’s mission statement – or even the name of the expression alone – is enough to tempt me to try a bottle – or at least sample a glass or two.

Fortunately with Flaming Pig Black Cask Irish Whiskey – I managed to acquire a promotional bottle to sample. Many thanks to Flor Prendergast – the entrepreneur behind the brand.

I first encountered the wonderfully named Flaming Pig brand a while ago with their  Spiced Irish release.

The story was fab.

And the spirit had a wonderfully rich christmassy cinnamon & clove spice finish which despite the sweet start – well it is a 33% liqueur – had a healthy warming whiskey bite too.

The Flaming Pig Black Cask is produced at the West Cork Distillers plant down in Skibbereen who release a fine range of expressions that often break the mould of what an Irish whiskey should be. This one is no exception.

Aged in heavily charred ex-bourbon barrels, this non-aged statement blend has been imbued with the strong sweetness & flavour of bourbon – yet with an Irish twist.

You could say it’s flavoured with fire!

The rich dark golden colour would imply added caramel in my book – there is no mention of it on the label – although the charred casks would also darken the spirit & add a sweet body to the mix. At 40% strength I assume it’s chill filtered too.

The rich sweet notes build a certain depth at the start- very bourbony with vanilla & caramel – but the delightful hint of warming spices at the end lifts this whiskey for me.

Flaming Pig Black Cask isn’t going to set the world on fire – but it lights up a cold winters evening by the hearth. It also opens up Irish whiskey to new flavours emboldened by the charred barrel ageing.

Long may the Flaming Pig squeal!