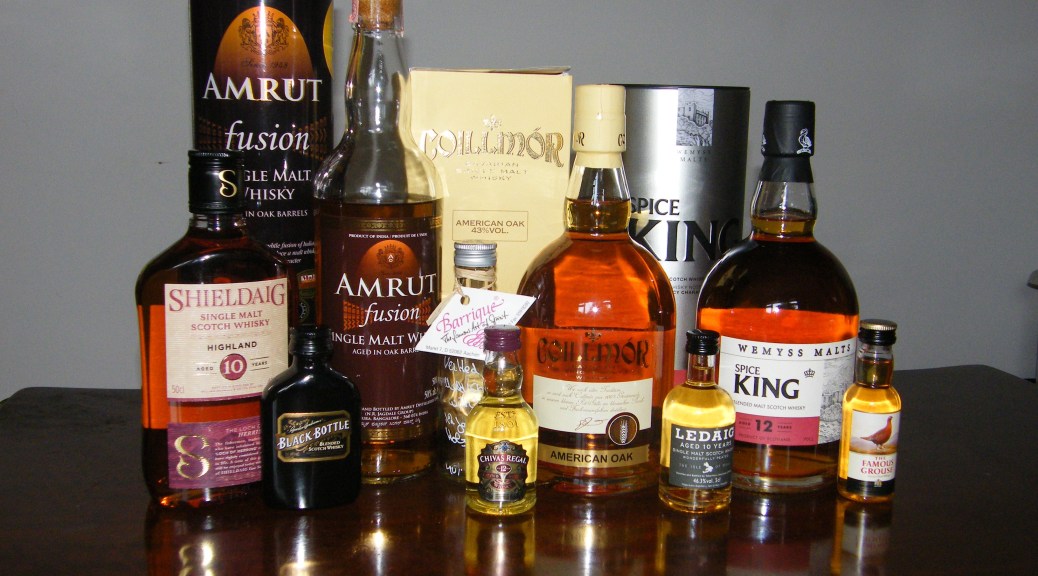 Aachen – a city of 250,00 souls in the North Rhine Westphalia area of Germany founded by the Romans and famous for it’s Cathedral as well as  Charlemagne – and also my chosen spot to explore the Benelux countries.

My first day in town was spent exploring the lovely cobbled streets of the old historical centre snapping away like the proverbial tourist I’ve become. Very enjoyable it was too – especially when I gained some free time to wander round the whiskey shops whilst my better half did a tour of the Charlemagne Museum!

Neooro die liquidboutique shop is handily just near the museum on Markt. A fine display of assorted drinks from around the globe greets the customer and they had a small selection of German whiskies for sale including the alluring – if not highly priced Preussischer Whisky. Now I realise that German distilleries produce spirit on a small scale which is reflected in the cost – but it’s at the top end of my budget – so it has to be exceptionally good, have a great story, have been previously tasted and set my tastebuds alight  or have been offered a sample to try before I could commit to it. As these criteria were not met – and the other releases were mainly grain whiskies in lovely looking bottles but similarly priced – I simply window shopped and moved on.

Barrique – also on Markt and just around the corner – is a much more down to earth establishment selling a wide array of wines, spirits, oils and vinegars – all of good quality. It’s method of selling these wares was rather refreshing – and something I’d never come across before.

It’s how all whiskey used to be sold in times gone by. The distillery would sell the wine merchant (for example)  a large quantity – the consumer would then bring along a suitable container into which the wine merchant would decant the spirit. No fancy labelling – no artwork – no bottle – no ABV marking – no mission statement. Now this I had to try!

Sadly no German distillery had offered their spirit by this method – but with a fine array of Scottish, American, Canadian and a sole Spanish expression on offer – it took me a little while to choose.

In the end I went for a 12 year old Ledaig – as this expression from Tobermory was mentioned as a favourite during conversations back in London – and the Spanish DYC Single Malt – as I’ve previously tasted and enjoyed the DYC blend before whilst on a trip in France. Barrique supplied a printout with information on the spirit purchased – but as it was in German I didn’t understand it – as well as an assortment of bottles to put the spirit in. I went for a 100ml size with the intention of bringing them home on the plane – but as we arrived in late every night after a hard days sightseeing a tasty dram was in order and they were empty before we even got to the airport!

The Ledaig proved to be lovely and smooth with the peat giving it a bit of body to the malt. The DYC didn’t have the peaty kick – but was a more complex and flavoursome tipple than it’s sister DYC blend I enjoyed before.

Now the vatted Ledaig and the DYC in Barrique are probably not available in a bottled release from either distillery – but this method of selling whisky certainly gives the consumer an opportunity to sample an expression from a number of distilleries and gain a insight into the flavour profiles of those premises at a reasonable price – something I’m all for. I wonder if this method could catch on elsewhere – or is viable – as the shop keeper mentioned – not all distilleries are willing to sell their spirit this way. Pity.

There was another shop selling spirits this way in Aachen – Vom Fass – which is an international chain with premises around the world. Despite wanting to get some refills in an attempt to sample yet more fine drams – I never managed to visit whilst it was open.

Reunited with herself after our respective tours a spot of light refreshment was in order and we repaired to The Ergmont watering hole on Pontstrasse. A wonderfully decorated friendly place it turned out to be. Despite an extensive drinks menu there were no German whiskies so I tried out Cutty Sark – which is one of blends that is more popular abroad than it is at home.

This light delicate blend with a soft peaty punch together with a snack from the neighbouring cafe perked me up no end.

Further up the street we stumbled upon yet another drinks vendor.

Weinhaus Lesmeister is a lovely emporium of fine wine, whiskey, rum and other alcoholic beverages. The staff were very friendly when I enquired about German whisky of which they had a few. Sample tastings were offered and the familiar light yet woody flavour profile I associate with these releases were soon hitting my tastebuds. A bottle of Coillmor Bavarian single malt was duly purchased which completed my baggage allowance for the flight home.

As the transaction was going through – the shop keeper asked if I knew of a distillery only 10 minutes from Aachen?

Whiskey Tip No. 3  Always do your research! Despite checking for nearby distilleries on the excellent site deutsche-whisky.de – I’d failed to check out Belgium, Luxembourg or Dutch distilleries.

I had a big smile on my face with the thought of calling in on a distillery during our car trip tomorrow – but one look at herself told me that would definitely be verboten!

Radermacher – 1 of 7 whisky distilleries in Belgium I’ve come across – have been distilling since 1836 – mainly gins and liqueurs – but also a few whiskies. Lambertus single malt was the one I’d encountered but resisted and now I had to drive past the distillery in Raeren on the nearby E421 road as we made our way – as part of our sightseeing tour – to the highest point in Belgium!

Signal De Botrange at 693m – the height of Belgium. A welcome cafe awaits the traveller in this popular skiing area of the Hautes Fagnes Natural Park. There is actually a Signal De Botrange beer available – but as it’s brewed in Colorado – it wasn’t for sale in the cafe.

Luxembourg’s high point was even lower at 558m. There is no cafe but we called in at the nearby smatch supermarche on the N7 road where I glanced at the whisky shelves.

Whiskey Tip No. 4  If you’re going to buy whisky in Europe – check the tax rates first!

There was a bottle of Glenfiddich for 11 euro – and that Belgian Lambertus for 25 – it cost nearer 45 in Aachen! Oh dear -not enough homework done!

I also didn’t do my homework when I found a Luxembourg distillery after I returned home too! I think a European Whisky Distillery Tour could be in order!

The Dutch distilleries I did know about – but they were a little off our route the following day. I was hoping there would be some on the menu when we called in for a meal in Maastricht but alas no such luck.

As with all holidays – time flies – and so we began our return journey via train to Cologne for the evening. There were more whisky shops – but none open during my time in this picturesque city. I made do with a refreshing pint of wheat beer enjoyed whilst taking a lovely cruise along the majestic Rhine on what proved to be the warmest day of the trip.

The last whiskey purchase was courtesy of Heinemann Duty Free at the airport. Sadly there were no German expressions – but I did pick up a bottle of something which seems to be a private bottling for a German wine merchants.

Now this 10 year old single malt tastes as lovely and picturesque as the pretty little village it’s named after in Wester Ross, Scotland – but if you go looking for a distillery there you won’t find one.

William Maxwell are marked as the bottlers but an internet search leads you to the well respected and award winning independent bottlers Ian Macleod from whom this very drinkable dram may originate. There is no indication of the distillery it came from unless you narrow it down to Highland printed on the label.

So there you go – a European Whisky Odyssey – plenty discovered and a lot more to find.

What have been your European discoveries?  It’s a growing market with new releases all the time.

I’d love to know what else is out there.