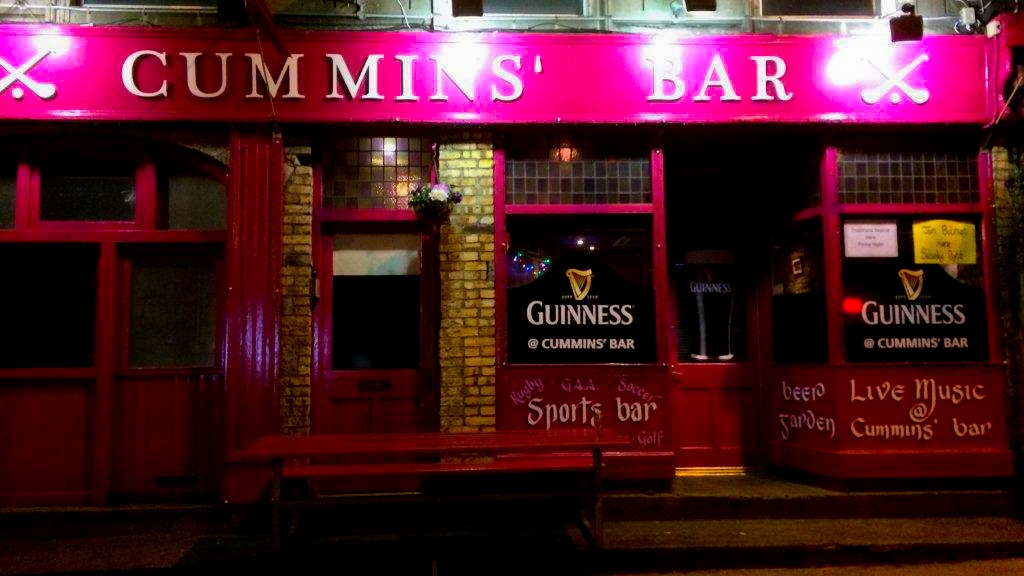 There was an article in the Irish Times the other day about rural development & Gort happened to feature.

Picking up the paper in the town itself after an enjoyable evening topped off the experience.

The revelry started with a meal at The Gallery Cafe in the Square. A popular spot offering great food & some tasty  beers to boot.

Kinnegar’s Rustbucket Rye Ale washed down my burger delightfully as we chatted outside on the terrace taking advantage of the warm evening sunshine.

A bar was selected afterwards & Cummins on Main Street suited us.

Garishly coloured on the outside & embazoned with GAA murals we entered into a trad session being played in the corner by a group of local musicians with a small gathering of drinkers happily tapping along.

The usual whiskey suspects lined the shelves, Powers, Paddys & Jameson being the standards – a Teacher’s was there too and I fancied a peat hit so went with it.

Teacher’s is a well established blend of Scotch Whisky. A bit on the rough & ready side, sweet peat & a little spirity, but you know what you’re getting.

Chatting away I scanned the shelves for something I’d not had before & spotted a couple of bottles half hidden behind others.

Highland Earl Special Reserve was duly ordered on the next round.

Now Highland Earl is an Aldi brand. An entry level one at that too – and I’d hesitated buying one after having a tad too many caramel laden blends in the past – but being in a bar is a fabulous way to sample it.

My first nosing raised a smile.

A decent waft of balanced peat greeted me.

The palate was more mellow & soothing than the Teacher’s. Yes there is added caramel & yes there is probably chill filtering – but then so has Teacher’s.

If anything Highland Earl lived up to it’s – admittedly low level – titled status by being a step up in enjoyment from the recognisable big brand.

Now the bar’s bottle seems to be an old offering. There is no age statement as with the current 3 Year Old release – and a tagline on the label proclaims it to be a 2010 IWSC Winner!

So I can’t vouch if what is on sale now matches the bottle I tried – but what I can say is the Earl entertained me for the rest of the evening!

Oh the joy of pubs & the simple pleasures of a decent peated blend!