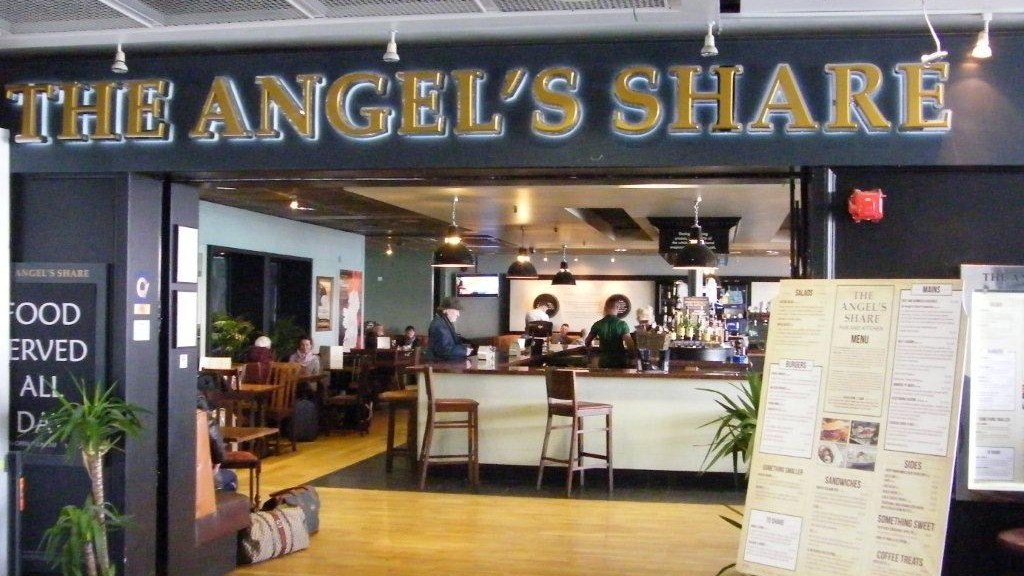 Dropping the better half off at the airport the other week allowed me to explore the landside bar I knew existed but hadn’t actually visited.

Handily situated at the far end of the ground concourse below the Ryanair check-in desks – I was a little taken aback to see the name ‘The Angel’s Share‘ emblazoned above the wide entrance – together with a glass cabinet full of rare or hard to find Irish whiskeys.

For those that may not be aware – ‘the angel’s share’ is a whiskey term handily explained by reference to one of the bar walls inside this bright and airy establishment.

It’s also the title of an uplifting tragicomic movie by none other than Ken Loach which I’d wholeheartedly encourage you to see.

Now I know that the ‘piece de resistance’ in Dublin Airport is the magnificent Loop whiskey emporium on the airside duty free area – but for those not flying – or with a little time to spare – The Angel’s Share is a lovely spot to enjoy a glass of your favourite Irish Whiskey perhaps accompanied by a tasty meal or snack too.

Jameson’s fine Black Barrel release was ‘Whiskey Of The Month’ when I called – but as usual I was on the lookout for something I hadn’t had before. Sadly the rare cabinet whiskeys seemed to be  for display only as a member of staff couldn’t recall them ever being opened!

The Angel’s Share had a good selection of Midleton expressions – Jameson – Powers – Spots and Paddy  together with some Teeling and Hyde. Bourbons and Canadian Club also featured. What tickled my fancy however was a somewhat neglected Midleton release – Dunphys.

Dunphys Irish Whiskey was originally created in the 1950’s mainly for the American market. It became popular as a mixer – particularly in an Irish Coffee – but it’s star has now waned. Midleton’s sales force don’t seem to be pushing it either as many a pub I go into has a ‘Premium Whiskey Selection’ menu featuring only their own releases – in which I’ve yet to see Dunphys included.

Truth be told I wasn’t expecting much being treated as the black sheep of the Midleton family – but Dunphys proved to be a fairly rich tasting malty standard blend. At the price point it’s sold at it compares very favourably indeed. I suppose it has an old fashioned taste – if you can define old fashioned. I certainly enjoyed it and even wondered why it had been left out in the cold – Irish Coffee anyone?

Discovering this little haven of calm in a busy airport left me with a smile on my face.

Other customers were tucking into hot meals – their first or last decent pint of the black stuff depending on travel plans – or just enjoying a wee dram collecting or dropping off friends and family. Just be careful not to relax too much if you are flying however!

Whatever the reason – The Angel’s Share will certainly brighten up my visits to the airport.