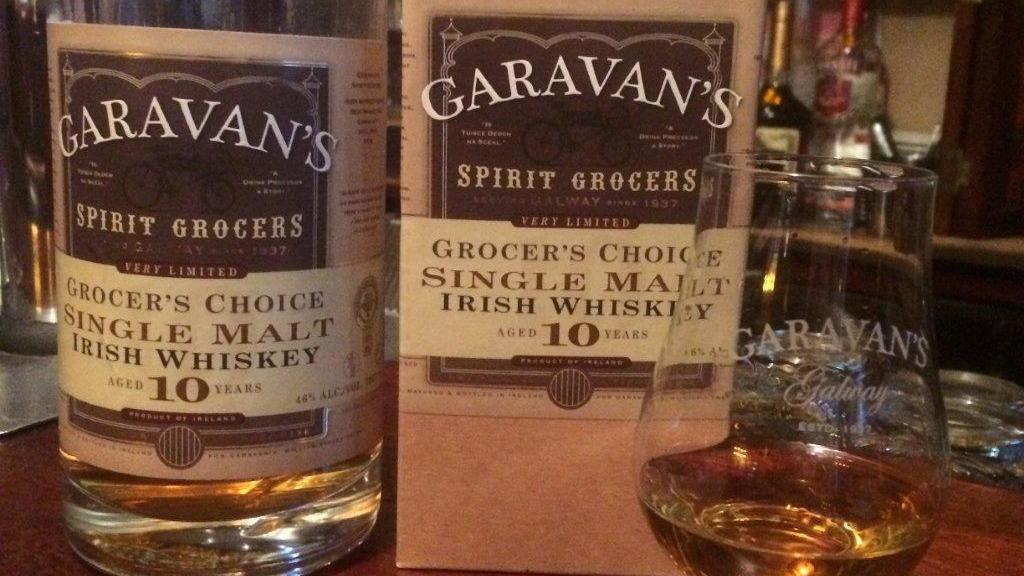 Only the other day I was remarking there would be an increase in bars releasing their own label whiskey when;

Out of the hat pops the Dead Rabbit whiskey.

Shortly followed by a Garavan’s 10yo single malt!

I get as excited as a kid at Christmas with every new Irish whiskey release. In this instance it was a lot easier to visit a pub only an hour down the road – rather than a trans-atlantic flight across the pond – for me to sample one of these bottles!

Garavan’s is a gem of a whiskey bar. One of the 12 venues on the Galway Whiskey Trail. It has warm wooden snugs & paneling, loads of whiskey coupled with friendly welcoming & informed staff. What more could a whiskey fan ask for?

I ordered up my Garavan’s Grocer’s Choice 10 Year Old Irish Whiskey – neat as is my way – & awaited the joys that were within.

The nose opened up with some playful fruity notes – this whiskey isn’t shy about coming forward – with some rich vanilla & caramel from the bourbon cask maturation.

The taste was a delight. No holding back here either. Clear, crisp & fresh. More of that warming bourbon influence with a soft prickly spice too.

The finish was suitably long & mellow – yet left a satisfying lingering heat. Time for a tune for the recently departed.

I liked the no nonsense label too. It harks back to bygone days when brown paper bags were the norm – deliveries were done on a bone shaker & each grocer had their own whiskey – from sourced distilleries!

There is no mention on the bottle as to the origin of the spirit within. Under both Irish and Scottish whiskey rules there is no legal requirement to do so – and I’m happy with that.

I don’t judge a whiskey by the cover.

I judge by the contents.

And the contents taste lovely!

Only when I blew up the photos  – I’m of an age when all of a sudden the small print has become a bit of a blur – did I see some of the reasons why.

46% in whiskey terms is a magic number. It usually denotes non chill filtration. On my palate at least that means bigger & bolder flavours – more taste sensation & more warming heat. All of which Garavan’s Grocer’s Choice possesses in spades.

There is no mention of added caramel – but the bold clarity of the flavours suggests not.

There are plans to release the whiskey for retail – but in the meantime it’s only available at Garavan’s bar.  For me – it’s the best place to experience this fabulous new Irish whiskey – having the craic & sharing the friendly banter with both regular customers and welcoming bar staff.

Sure what are you waiting for?