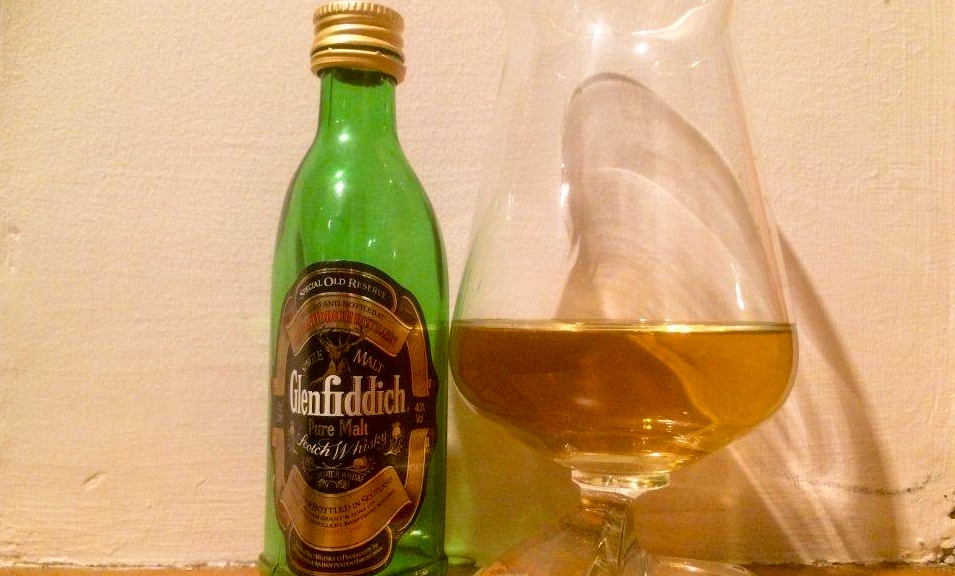 It was a new experience for me – taking part in a Whisky Auction.

I wasn’t after rare or collectable bottles – just a few odd ones to try at an affordable price.

I bid on some mixed bags of miniatures – a broad sweep of whiskies to sample – and happily managed to secure one.

An old Haig Dimple bottle with indeterminate writing on the back had obviously suffered some spirit loss.

The cap was loose too – allowing air in – with predictable results.

The whiskey inside had deteriorated to such an extent the nose was painful – the sample went straight down the sink!

I ploughed on with an intact bottle of Glenfiddich Pure Malt.

Now Pure Malt is an outdated term. It began to fade in the 1980’s and generally denoted what we’d now call a single malt i.e. malt produced at one distillery.  It could also have meant a blended malt i.e. malt produced at more than one distillery, but as Single Malt also appears on the Glenfiddich label – we can count on the former interpretation.

Basically what I had in front of me was an old Glenfiddich Whisky bottle – so I cracked it open and poured myself a drink.

A heavy butterscotch sweetness combined with a gentle soft smokiness greeted me.

I was just happy to get a bottle that hadn’t gone off!

To be honest I found the sweet caramel too much – but the gentle smokiness – like the wisps of a fire – made it an enjoyable experience.

The joys of auctions!