All the more reason to grab this Thistly Cross Cider when I spotted it in a local Co-op Store when over in Scotland.

Suitably pale in colour the nose offered up a lovely dry apple aroma.

Crisp, clean & fresh taste augmented by a richness of depth to the body.

It states ‘Matured for six months in Scotch Whisky Casks‘ on the label – no mention of style, distillery or region given – yet I found it hard to discern any whisky flavours in the cider.

I did enjoy the dry apple influence & wholesome feel of Thistly Cross however & would happily grab it again when I next visit!

My favourite whisky shop in Anstruther doesn’t just do novelty whisky – it also does proprietary brands.

Respected bottlers Douglas Laing are behind this Gauldrons Blended Malt.

Described as ‘ a marriage of aged single malts from Campbeltown‘ Gauldrons is presented non chill filtered with no colouring.

Suitably pale in the glass – always a good sign in my book.

I’m getting a soft kiss of smoke with old leather on the nose.

Was expecting a bit more of a peat hit – Gauldrons was quite mild mannered & tame in that respect – yet otherwise a decent dram. 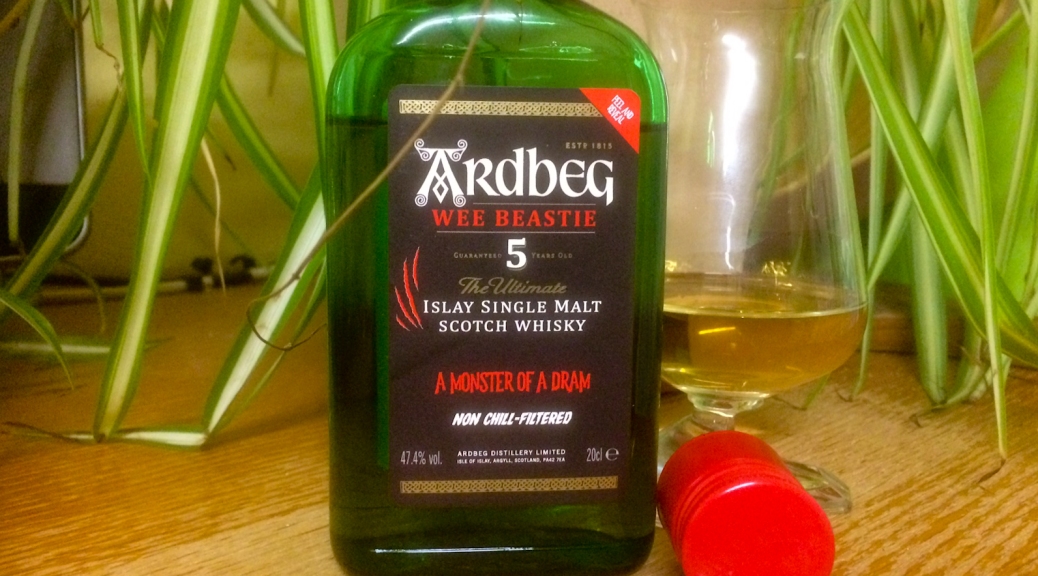 With Ardbeg Committee Releases well beyond my price range I’ll settle for one of their core bottlings – Wee Beastie – and in a naggin bottle too!

It’s surprisingly delicate on the palate – before that gorgeous smokiness gradually takes over.

A Monster Of A Dram indeed!

When in Anstruther I usually pick up a few bottles in the Wee Couper Of Fife Whisky Shop.

They have a varied selection of miniatures – mainly for the tourist trade – as well as single cask bottlings for the aficionados.

I enjoy sampling the miniatures myself – so picked up a pair of themed minis from the Cumbrae Supply Co.

The Jockey & The Fisherman sport stylised images of their namesakes, are presented at 40% with no mention of distilleries sourced from, nor chill filtering or added caramel, which I’d expect for this type of product.

Without further ado I poured some glasses.

Similar nose, if anything an easier palate, softer, sweeter, with less dryness on the rear.

I was expecting to find this pair to share the same source – but they did differ slightly on drinking.

For me The Jockey has pulled clear of the sedentary Fisherman. 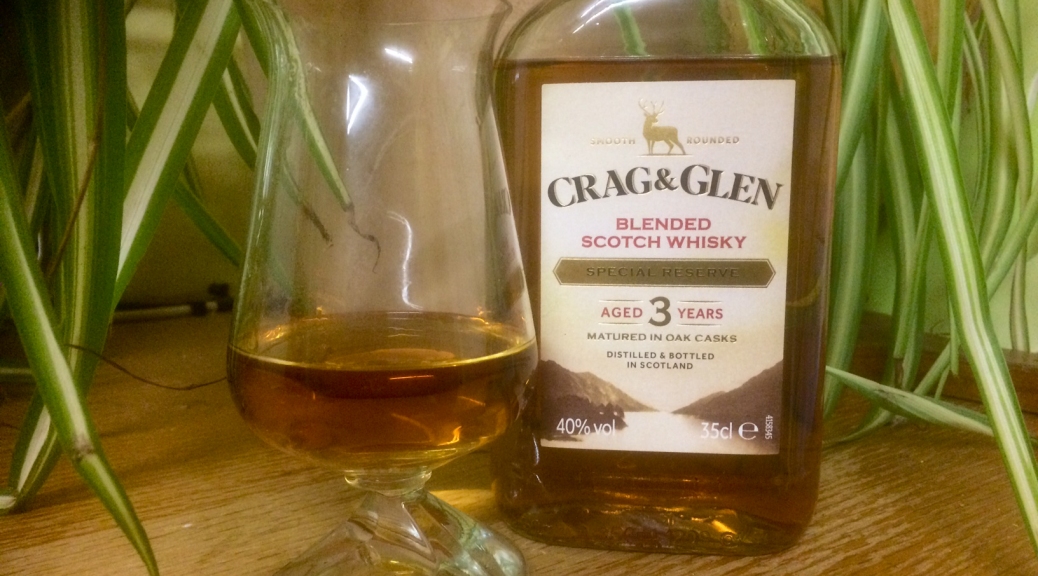 I picked up Crag & Glen on my last Scottish trip.

Usually I stop at the last supermarket before the ferry to top up on haggis & booze that isn’t readily available in Ireland.

Sadly the Asda in Girvan had only 1 haggis left & it was too early in the morning for alcohol sales – so another plan emerged.

Sainsbury’s in Lisburn provided my needs.

There are no Sainsbury’s in Ireland – hence Argos pulling out – but Northern Ireland has them – so I indulged in some supermarket spirits.

I do enjoy trying out this category. There can be some good ones & being only a 35cl serving the outlay is minimal. Pity there’s little choice in this size.

Crag & Glen is Sainsbury’s own bottling. It has a suitably bold name that conjures up romantic notions of rugged Highland scenery, magnificent stags & warm drinks by a roaring fire.

Can tasting the whisky match the imagery?

First thing I notice is the golden brown hue of this 3 year old – very suggestive of added colouring & chill filtering – which you kinda have to expect at this price point.

The label very aptly displays ‘smooth & rounded‘ – an accurate descriptor of the mouthfeel.

The finish is the best bit for me – a warm juiciness topped off with joyful prickliness leaving a dry lip-smacking finale.

As basic supermarket brands go Crag & Glen lives up to it’s imagery – minus the roaring fire!

Argos pulls out of Ireland here. 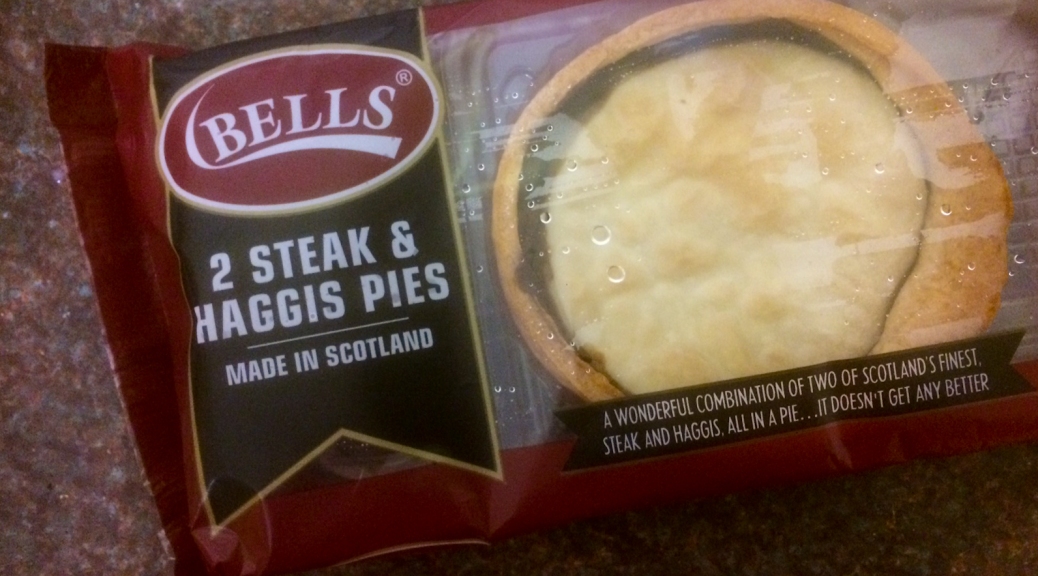 But it does share the name of a popular Scotch Blend.

And it is a Scottish delicacy.

All wrapped in a tasty meal!

If you visit Scotland & don’t partake of whisky, pie or haggis – you’re missing out.

I usually ‘go native’ & immerse myself in the tasty trinity.

Innis & Gunn were one of the first beer companies I encountered using barrel ageing to give additional flavours to their brews.

This Caribbean Rum Cask is the latest I picked up in a local Co-op on my Scottish travels.

It’s slightly unusual in using Red Beer as the donor brew rather than the commoner stouts normally found.

I do like the neck collar motif proudly displaying ‘Aged 51 Days‘.

Another nice one from Innis & Gunn!

The trip wasn’t centred around whisky – although it was enjoyed.

The hotel bar stocked a limited selection of Scotch – most of which I’d sampled before – so a pleasurable peater in the guise of Highland Park 12 was chosen.

The smoke gently enticed on the nose in a balanced mix of flavours.

A more bolder peat hitter – Talisker Skye – was encountered in The Golf Hotel in Crail. I also noticed their ‘bar pour’ was a double of Scottish Leader – also possessing a smoky element – which I politely declined.

One new Scotch I stumbled on was Naked Grouse.

A soft kiss of smoke wrapped up in a warm hug of a whisky gave an easy drinking & finely balanced dram with a little bite on the rear.

Turns out it’s a blended malt with additional ageing in sherry casks & happened to be ‘whisky of the week’ at my hotel.

I happily accepted the suggestion this time round! 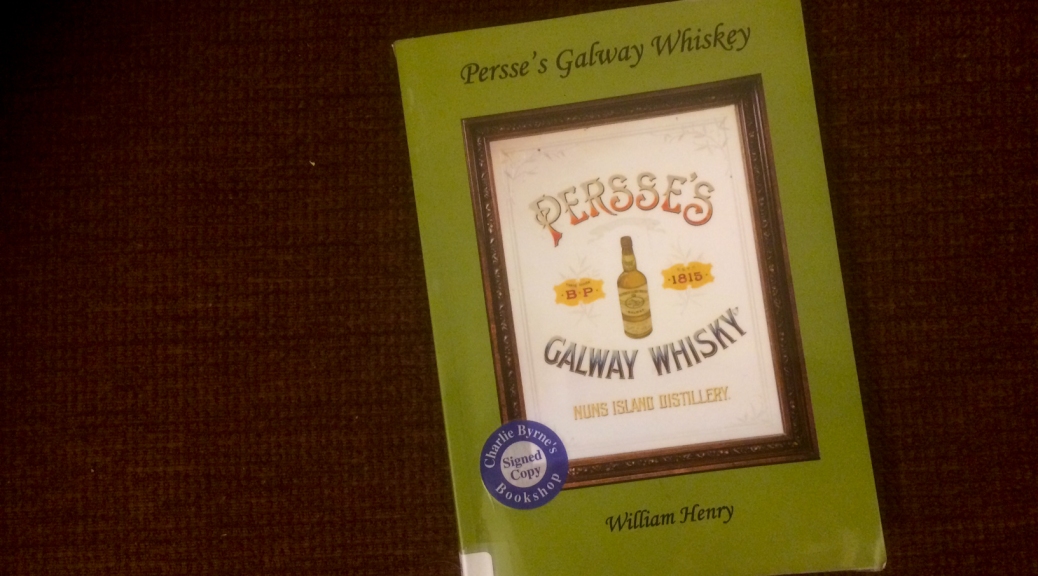 I also enjoy reading about it.

Especially an historical whiskey located in Galway that I’m unlikely to obtain a glass of anytime soon!

At the height of it’s fame Persse Whiskey was considered ‘of the finest quality & highest order‘ and reached a global sales audience through shipping out of Galway Docks.

The book contains much detail & tales of the extended Persse family – many of which I’d never heard of before.

Lady Gregory of Coole Park fame was one such family member – it’s not known if she partook of the whiskey!

Mount Vernon – a house built by the Flaggy Shore – was named after George Washington’s abode by an admiring Persse member.

Quite what led to the demise of this distillery isn’t fully explored in the publication.

It pre-dates both prohibition & civil war in Ireland – 2 convenient events to explain the fall of Irish Whiskey.

There was an other event that isn’t always talked about. The invention of the Coffey Still by Irishman Aeneas Coffey in the 1830’s.

Persse didn’t utilise the Coffey Still in their production.

Scotch Whisky – mainly in the guise of Lowland blends – took to this new invention with gusto & created a new whisky category which usurped the former reigning sales topper.

Perhaps if Persse Distillery had embraced this new technology it might have still been around today?

As it is there are visible remnants of the former distillery to view across the rushing waters of the Corrib River as it flows into Galway Bay.

A very well researched & entertaining book on the glory days of Irish Whiskey.

While on holiday in Lucca I immersed myself into the world of Grappa.

One of the local Vino E Liquori shops did a Grappa with an image of Lucca’s iconic Piazza Anfiteatro on the label.

Safely ensconced in my accommodation a glass was poured.

Clear white spirit indicates a blanco grappa. This usually denotes unaged liquid – although it can be rested in steel vessels to smooth out any rough notes.

There’s a youthful freshness on the nose – but not overpowering.

A smooth & oily palate didn’t give much away.

Smidgen of dark fruitiness on the finish combined with a touch of prickly heat.

More of a novelty souvenir offering rather than a sipper.